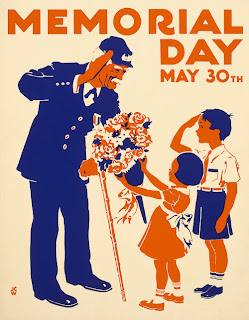 Posted by Patrick Segui RIVETED at 8:26 AM No comments: 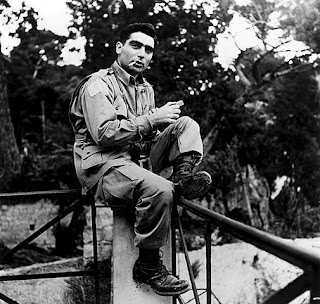 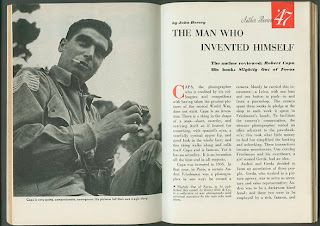 On this memorial day week end, i just wanted to pay tribute to one of my personal heroes who died on May 25th 1954 : the great Robert Capa........
Capa, Robert 1913-54, American war photographer was born in Hungary as Andre Friedmann. He came to Paris in 1933 and from that time on recorded with profound concern the spectacle of humanity caught in war .Capa began his career in the 1930's as a small time photographer. He would find himself in the middle of key historic events. From 1936 to 1939, he was all over Spain photographing the horrors the Spanish Civil War, taking the famous photograph of a Loyalist [supposedly]at the instant of death. World War II would bring Capa all around the world photographing on behalf of LIFE magazine.
His most famous work was done on June 6th, 1944 (D-Day Normandy Invasion) where he swam up on the beaches like all the other soldiers that day, but instead of being armed with a gun, he was armed with his camera.
After a brief period of rest following World War II, Capa traveled far away to Southeast Asia where the French had been fighting for 8 years in the First Indochina War. Capa followed a French regiment on May 25th, 1954. At 2:55PM, the regiment passed through a dangerous area in deep forests. Capa, not watching where he was going, stepped on a landmine, ending his glorious career short.
Posted by Patrick Segui RIVETED at 6:02 PM 2 comments:

today's post will feature one of the oldest Henley style undershirt from my collection .this early 1900's 100% Merinos wool Canadian beauty ,features an interesting collar with a concealed flap for additional warmth .this example is thought to be from around 1910 .
John Penman started his company in Paris, Ontario in 1868. The company's grew quite fast ,acquiring  several mills such as, the Peninsular Knitting Company, Thorold, Ontario, the Coaticook Knitting Company, Coaticook, Quebec, and the Norfolk Knitting Company, Port Dover, Ontario.Their products included underwear, socks, blankets, and flannels. The company was incorporated as the Penman Manufacturing Company Limited in 1906 and it was at this time that John Penman relinquished control of it. Penman died in October 1931. A strike began on January 1949 at the Penman's textile plant in Paris that lasted three months hurting its business. Penman's became a subsidiary of the Dominion Textile Company of Montreal in 1965. During the following 2 decades one factory was closed after the other. By September 1987 the Dominion Textile Company sold the business to the TAG Apparel Group of Mississauga. In March 1990 the TAG Apparel Group, owner of the Penman's sportswear plant in Cambridge and the Harvey Woods underwear plants in Woodstock and London was placed in receivership because of the company's failure to pay several million dollars in loans marking the end of the Penman's saga....... 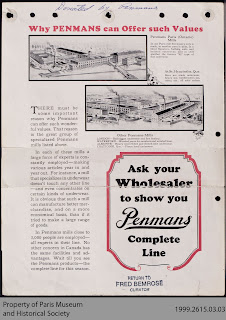 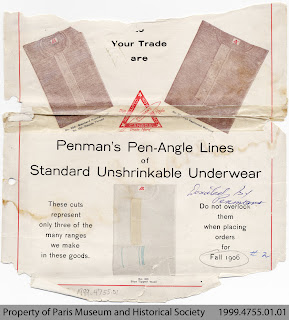 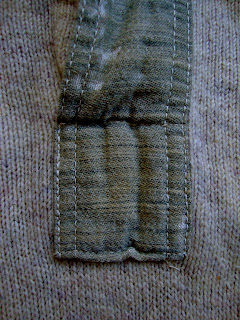 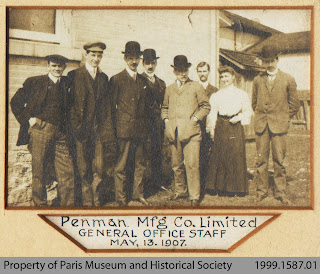 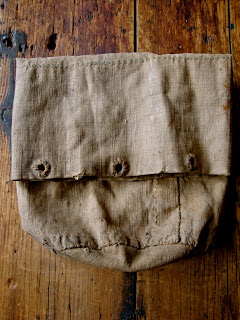 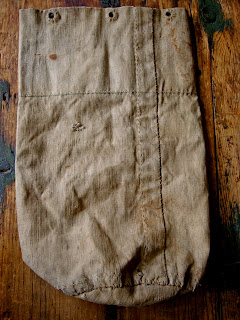 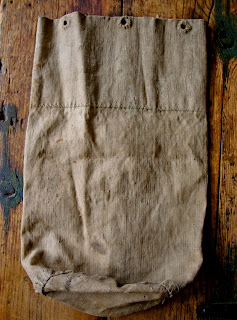 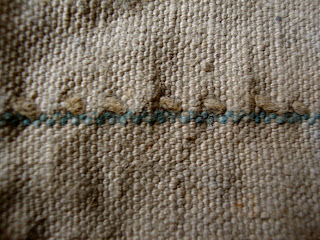 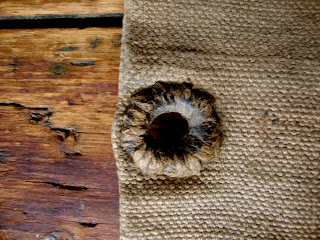 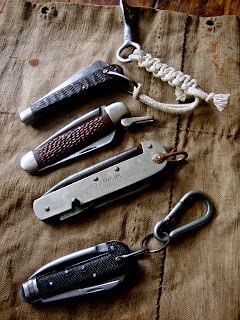 Some of my fav sailor/rigger's pocket knifes.... 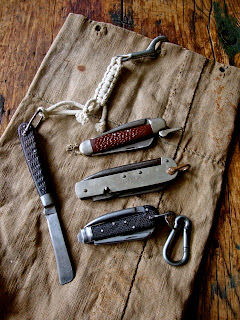 Such bag were commonly made on board sail ships ,where accomplished riggers were recycling torn sails turning them into small or larger ditty bags to carry personal effects ,tools and so on...
Posted by Patrick Segui RIVETED at 10:03 AM No comments: 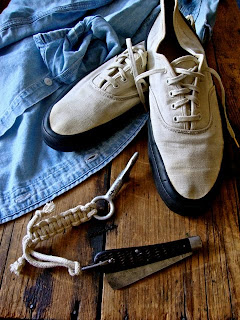 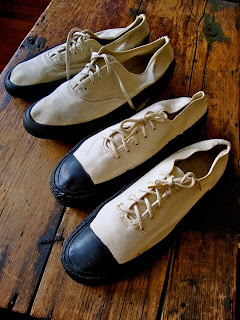 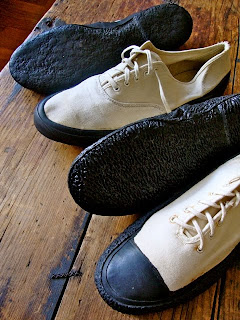 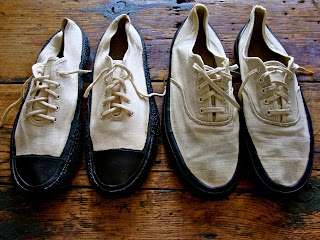 Fresh from ww2 navy seabags and the infamous RIVETED grotto, 2 pairs of black and white deck shoes . canvas deck shoes were often worn and favored by PT boats and submarines crews in the Pacific.It might by explained by their light weight, ruggedness and fast drying capacity if soak with salt water.These 2 examples are brand less,but i do think the one without cap toe was manufactured by US RUBBER CO.
THE PAIR ON THE LEFT [cap toe] A 7M WILL BE 4 SALE ON EBAY THIS WEEK .....
Posted by Patrick Segui RIVETED at 8:56 AM 10 comments: 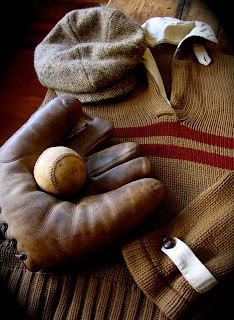 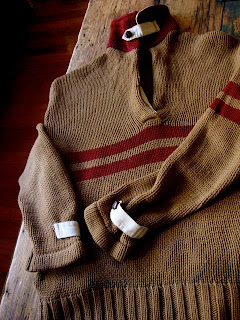 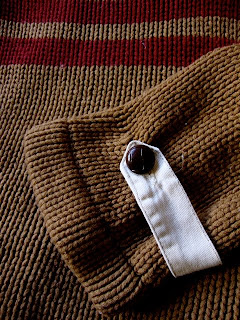 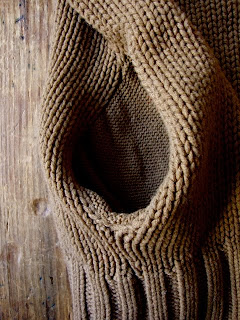 Detail of the side pockets with tighter gage for a stronger lining..... 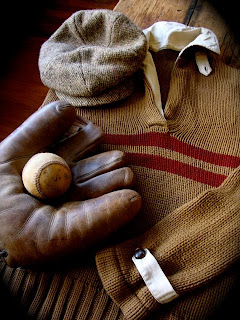 Was lucky to find this sweater on Sunday .Made of lighter Gage wool, it's a perfect fit for that SF spring weather.
Posted by Patrick Segui RIVETED at 10:07 AM 2 comments: 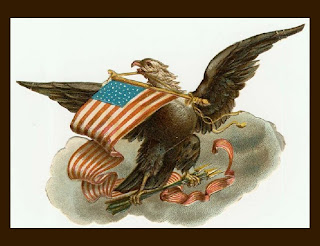 Posted by Patrick Segui RIVETED at 8:45 AM No comments: