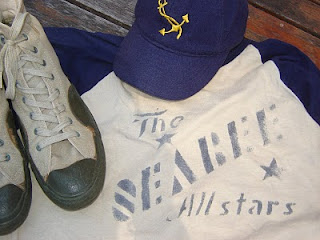 the first shirt for "el numero uno"
thx PAPA for your nice plug
Posted by Patrick Segui RIVETED at 11:49 PM No comments: 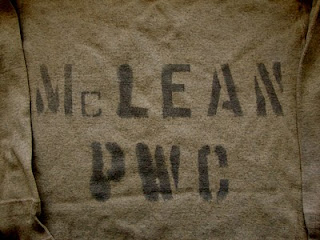 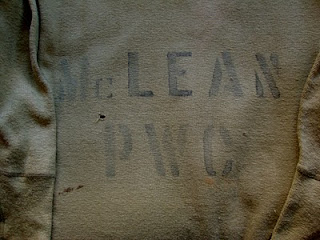 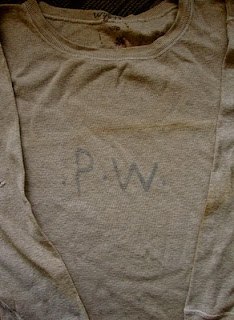 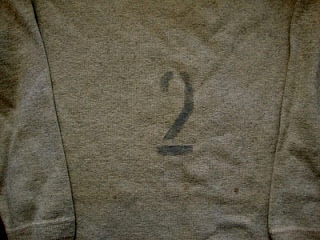 McLEAN TEXAS WW2 AFRIKA KORPS POW CAMP
Today riveted special will feature a rare find 3 rare WW2 POW winter shirts.
McLEAN a Texas panhandle town,started as nothing more than a cattle loading site along the Rock Island Railroad when in 1901 a water well was dug and a switch and section house was built. But among the railroaders, a large rancher had a vision. Alfred Row, an Englishman.He saw greater opportunity for the area and donated land near the switching station to lay out a town site.
He name the town for W.P. McLean of the Texas Legislature and Railroad Commission, the town quickly grew, gaining a post office by 1902. Just one year later the town was incorporated and  boasted two banks, two livery stables, two wagon yards, two cafes, a post office, a lumber yard, newspaper called the McLean News, and a furniture store.
In 1912, Alfred Rowe, the town’s founder, left McLean to visit his native England. Tragically, he would never see McLean again as, upon his return to the United States, he met his death on the Titanic when the grand ship sank in the Atlantic in the early morning hours of April 15, 1912. Legend has it that rescuers found him hugging his briefcase, frozen to death atop an ice floe, with his gold watch still ticking.
In 1927 the town profited from the oil boom, becoming a major shipping point for area livestock, gas, and oil. And, in the very same year, the Mother Road arrived in McLean, further insuring the town’s growth for the next several decades. During the Golden Age of Route 66, McLean boasted 16 service stations, six motels and numerous cafes. Oklahoma based Phillips Petroleum Company built its first Texas service station in McLean in 1927. By 1940 McLean had six churches, a newspaper, fifty-nine businesses, and a population of more than 1,500.
In September of 1942, an area northeast of McLean was chosen to serve as the McLean Permanent Alien Internment Camp during WWII. During its operation, the camp boasted twenty to thirty buildings and housed 3,000 prisoners-of-war. The first prisoners were German troops captured in North Africa from the famous Rommel's AFRIKA KORPS, who arrived in early 1943. A second group of Germans captured in their Homeland were also retained at the camp. During its time, there were several escape attempts from the camp, but on the bare plains of the Texas panhandle there was nowhere to go. All were recaptured and seemed glad to return to the prison. The camp continued to operate until July 1, 1945.
Posted by Patrick Segui RIVETED at 5:40 PM No comments: 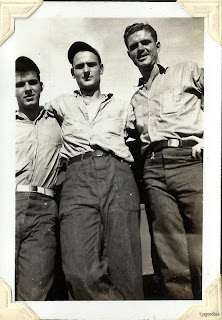 Posted by Patrick Segui RIVETED at 8:17 PM No comments: 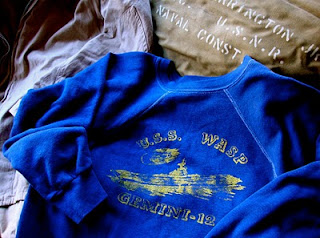 Today's post will keep up with the "Navy obsession" featuring an original mid 60's US NAVY sweatshirt with a NASA connection
USS Wasp (CVS-18) was the ninth US Navy ship to bear the wasp name. the carrier commissioned in 1943 was to be named originally :Oriskany,but, while still under construction,was renamed Wasp to honor the previous Wasp (CV-7), sunk in September 1942. the new Wasp served in several campaigns in the Pacific, earning eight battle stars. she was decommissioned shortly after the end of the war, but was modernized and recommissioned in the early 1950s as an attack carrier (CVA), and then eventually became an antisubmarine carrier (CVS). the Wasp played a prominent role in the space program, serving as the recovery ship for GEMINI  missions. the ship participated in the Gemini XII recovery operation from 5 November to 18 November 1966. It was the 10th and final manned Gemini flight, the 18th manned American flight and the 26th spaceflight of all time.The recovery took place on 15th of November when the space capsule splashdown occurred within 3 mi (5 km) of Wasp. Captain James A. Lovell and Major Edwin E."buzz" Aldrin were lifted by helicopter hoist to the deck of Wasp and there enjoyed two days of celebration.
She was retired in 1972 and sold for scrap in 1973.
Posted by Patrick Segui RIVETED at 4:54 PM No comments: 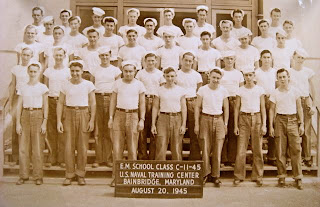 Posted by Patrick Segui RIVETED at 9:01 AM No comments: 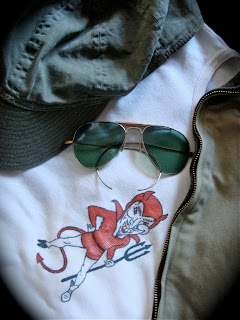 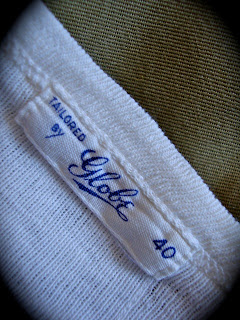 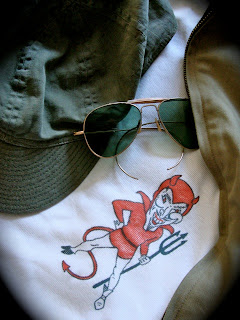 Well !! not much to say about this one .gotta love the devil's smile.
Posted by Patrick Segui RIVETED at 9:27 AM No comments: 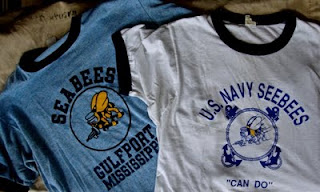 So,can you find what's wrong in this picture !?? both shirts are originals from the 60's .
Posted by Patrick Segui RIVETED at 9:55 AM 10 comments: 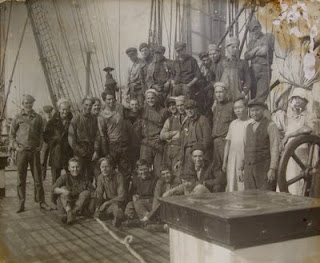 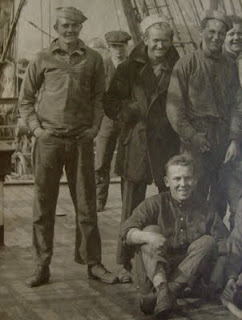 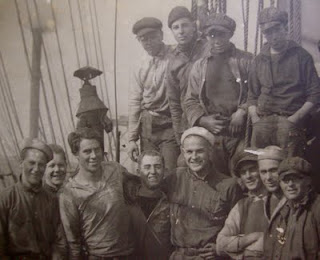 Found this great picture yesterday ,it has some damages but i had to have it .it's dated 1919 in the back  and was taken here in SF. gotta love the wide range of uniforms .there's even a ww1 USN peacoat here .double click for details.enjoy......
Posted by Patrick Segui RIVETED at 4:01 PM 4 comments: 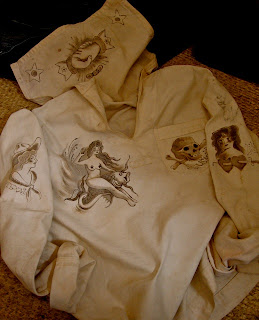 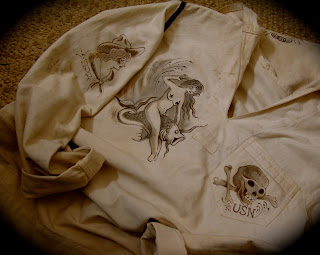 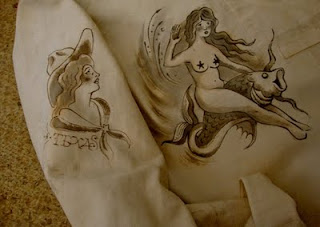 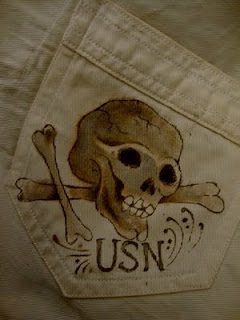 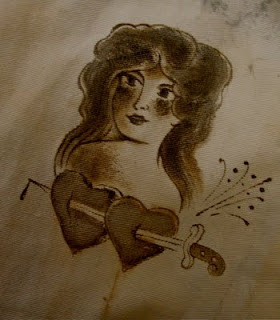 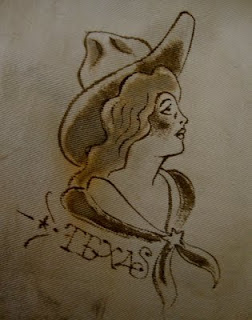 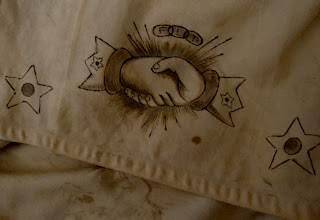 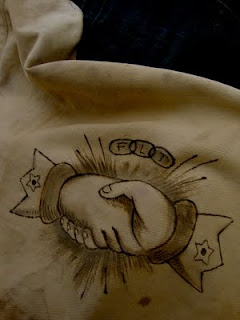 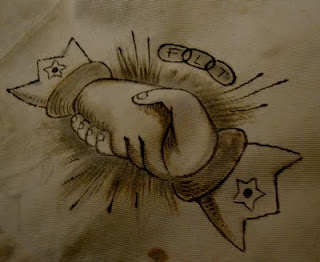 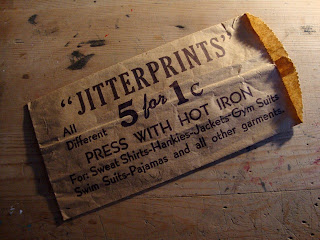 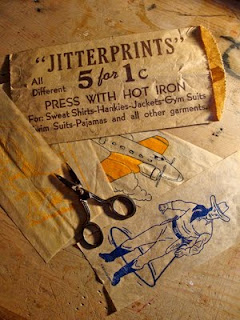 Found this ,in one of my drawers while doing a little cleaning .....these are pre ww2 iron on transfers only one is missing it was a racing car .i used it on a kid's shirt 10 years ago.the print came out perfect......
Posted by Patrick Segui RIVETED at 9:28 AM No comments:

Posted by Patrick Segui RIVETED at 8:36 AM 3 comments: