SEWING ON BOARD US NAVY WARSHIP 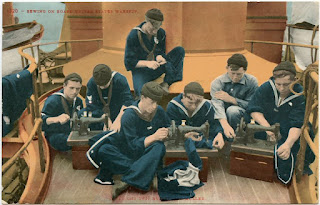 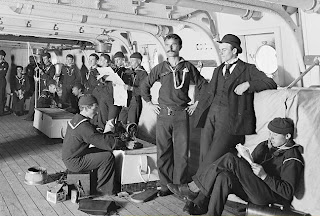 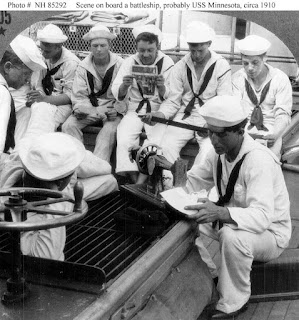 Just got this colored postcard the other day and thought it was worth sharing..... Until March 1907 no message could be written on the "address side" of a postcard mailed in the USA. Therefore, on these early postcards there is almost always writing on the picture side if they are mailed. Often, the postcard publisher included a white space along one of the edges that was meant for writing. This writing on the view side does not detract from the value of the postcard since it was the norm for these early postcards. These "undivided back" postcards are fairly scarce because they come before the boom of the postcard era which started in 1908.

The Navy always had a constant need for someone to sew on board its ships.In fact since ww1 ,the presence of at least one man with sewing/tailoring skills and his "helper" was required on each USN warship.  Men with such sewing machine skills were payed an extra 20$ a month and 10$ for their helper.They'll do even more on the side,creating fancy variations of standard uniforms or just with simple alterations for better fitting issued uniforms that'll be proudly worn by sailors while on liberty.Custom made uniforms adhered to Navy regulations, but almost always featured higher quality materials and inside embroidering. Sewing was also an essential skill in the maintenance of the ship. Repair work on hammocks, canvas awnings, and even the sails of early steel ships required an expert hand.