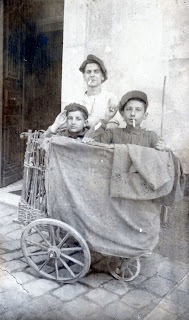 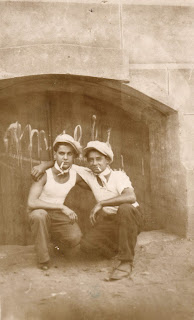 The Apache ,was the style "en vogue" among men in the first part of the 20th century.Thanks in part,to actors such as Jean Gabin the bad boy of his time .Apaches were Parisian hoodlums, living of gambling,prostitution and petty thefts.They spent most of their time in cafes and "bal musette"where they found easy preys [read women].Their "tools of the trade"were switch blades,brass knuckles and small custom made pocket revolvers.Their uniform,a large colorful and slightly tilted cap,a neckerchief and a sailor's shirt or tank top .....and,i've almost forgotten "le clop" [ the very important cigarette]. 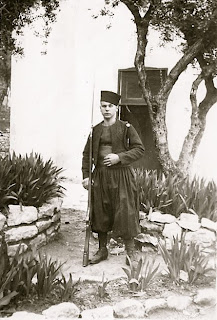 Around 1939 in Tunisia with the 4TH Zouaves regiment .He was one of only 2 surviving soldiers, as his entire battalion was,after fierce fighting,decimated by the German .
Today's post will mostly be about pictures ,as they speak by themselves......right !? Thanks to my dad,i was able to get my hands on some great pictures of my grandfather in Algiers back in 1930 .Typical style of the "everyday people" back then and quite stylish nowadays i might say.
Posted by Patrick Segui RIVETED at 9:30 AM