THE SIMPLER THE BETTER....Talking about work boots 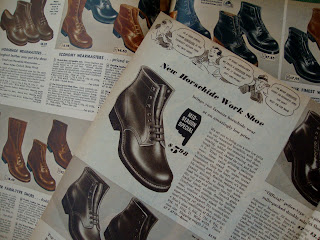 Ads from a post war sears catalogues.Surplus were plentiful so prices were lowered..... 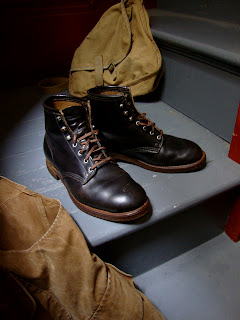 Nice pair of horsehide work boots with cork sole .A classic look brought back to life by brands such as Redwing and Lonewolf with an insane price tag .I'd rather hunt for a good pair of vintage.
al
ways been a fan of simplicity and this goes for footwear too .Nothing speaks to me like a beautiful pair of work boots looking good with either, a pair of denims ,cords, chinos or even wool pants .That's why,while on the prowl,i always favor straight lines and colors .today's post will feature one of my favorite pair of horsehide 40's boots .They have that timeless style that still inspires today's designers .Rationing was probably the biggest influence on wartime footwear in the United States Britain and France. The U.S. government at the time conserved leather and rubber among other precious materials for the war effort. The fashion industry was then asked to promote styles that would remain in fashion for a long time, releasing factory space for wartime endeavours. Basically shoppers were"told" to buy high quality clothing and shoes of simple and versatile styles that would last the duration of the war.With the rationing brought upon by the war only leather not suitable for army boots were used for civilian shoe manufacture. Canvas and heavy cottons began to be used for uppers too . Cork and cord were used to make soles mixed with recycled rubber.In Britain clothes were rationed from 1941 to1949 and rubber soles were banned in 1942. In the United States, people were limited to two new pairs of shoes a year. The soles were thinner, and for sports shoes soles were made of plastic or reclaimed rubber. In occupied France, leather shoes could not even be purchased. All shoes were wooden-soled, with uppers of string or fabric.Lucky us the wooden soles were to be "articulated" to ease the pain.