ALL ABOUT THE US NAVY DENIM JUMPER

10/15 years ago,way before the sudden interest created by the "NAVY-ISM" craze and some designer newbies ,not much was to be found about his peculiar and iconic piece of garment .to tell you the truth ,not many denim collectors cared about it as they were plentiful.Over the years, i've heard and read so many uniformed opinions about the dating of such a jacket,even in Japanese magazines ,that i've decided to put together this post in an attempt to showcase all the elements that'll allow the reader to understand its evolution and function in the US NAVY .
The blue denim uniform, dungarees, is the Bluejacket's [NAVY's bible]working uniform.  In 1901 regulations authorized the first use of denim jumpers and trousers, and the 1913 regulations permitted the dungaree outfit to be used by both officers and enlisted with the prescribed hat of the day.  Officer's engaged in aviation introduced the khaki uniform and eventually it was the accepted working uniform for officers.  Chief Petty Officers were in time allowed to don the khaki work uniform.
So let's start from the earliest clues found ....... from the pages of the NAVY'S bible :the 1917 blue jacket .This ww1 picture shows one of the very first denim jumper aka dungarees .It was a pull over one ,with 2 lower pockets .it is clearly the forerunner of the more common ww2 "open front"one.....it was not worn with a chambray shirt underneath as they were not part of the enlisted men's uniform then. 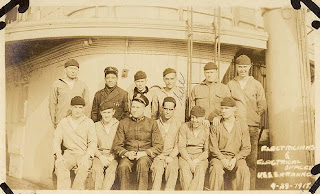 this shot, taken around 1918 in Florida ,shows a USN work party wearing the newly created "open front" jumper with removable brass buttons.It's a clear evolution from its forerunner ,allowing its wearer to take it off faster and making the dungarees more comfortable.Some of the earlier pull over example also present ....... 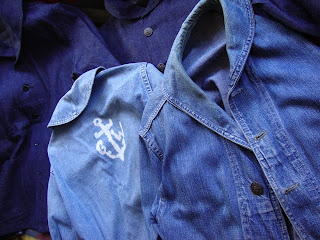