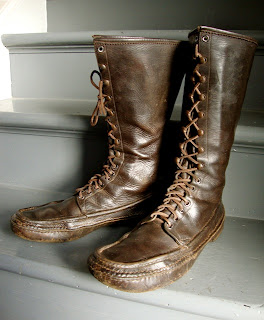 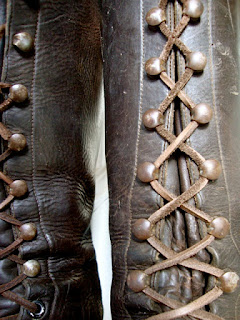 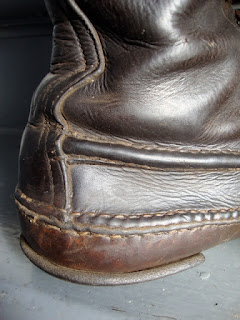 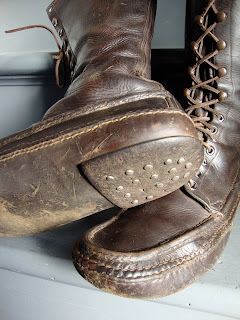 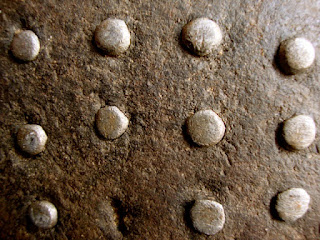 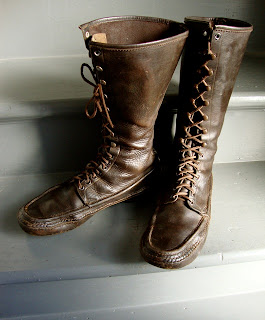 today's featured boot ,is a rare Ike Walton model by the famous Russell company.These,were obviously well taken care of ,to arrive in Riveted's vault 90 and some years later in that awesome condition .The Ike Walton is the obvious forerunner of the now popular "birdshooter" model,as it has very similar in its design .Called the company and they confirm the model ran from 1915 to early 1920's.
It's hard to believe,especially nowadays, that the iconic hunting boots worn by countless hunters the world over, have been,for more than 108 years,hand made in the same building in Berlin, Wisconsin
The Russell company started in 1898 when it's founder Will Russell hand crafted his first pair of boots for the then booming Wisconsin logging business. Quickly,hunters and outdoor's men recognized the value and toughness of the Russell's hand sewn boots...thus a legend was born.
A young traveling salesman with a genuine interest in the outdoors named Bill Gustin,joined the company in 20's . Armed with a degree from Ripon College, Gustin quickly spread the word about Russell's hand made moccasin and boots.After W.C. Russell's death in 1924, Bill, a competitive skeet shooter,hunter,fisherman,was aware of the company's greater potential.He foresaw sports men's needs and bought the company.The rest as we say, is history.
In the early 1930's Gustin introduced the now famous Birdshooter model along a line of oxfords, loafers and casual shoes.
Bill Gustin ran Russell Moccasin for 55 years and was joined in the business in 1956 by his son-in-law, Ralph Fabricius ,who took over the company ,when Bill passed away in 1994 ......
-- Today, Russell Moccasin still makes one pair at a time, hand lasted, hand cut and trimmed, hand sewn...with quality and pride.
Posted by Patrick Segui RIVETED at 9:53 AM